2022 Third Quarter Market Commentary: All Eyes on the Fed 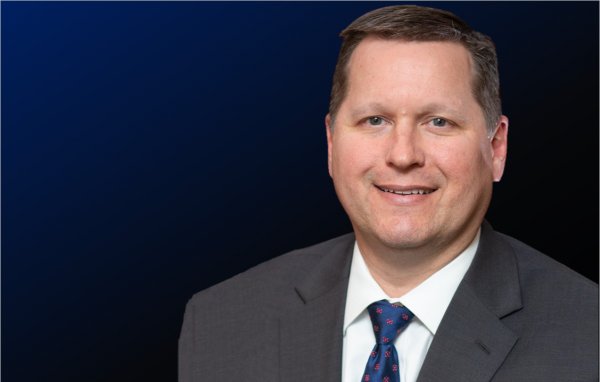 All Eyes on the Fed

After bouncing more than 15% into August on hopes of a Fed pivot, a higher than expected inflation report and more hawkish interest rate outlook by Federal Reserve Chairman Powell caused US equity markets to reverse course in September.  We doubted the likelihood of an about-face in posture this early with the headline Consumer Price Index (CPI) still at a peak.  As a result, for the third quarter of 2022, the S&P 500 ultimately fell 5% back to the lows of June and is down nearly 25% for the year.  The economy is slowing which is necessary to ease inflation pressures.  That said, bottoming in both the economy and markets is a process that unfortunately does not travel in a straight line.  We expect this tumult to persist until there is further evidence of the Fed’s success in subduing inflation.

In its simplest form, inflation is the product of too much money chasing too few goods.  Said another way, too much demand and not enough supply.  Consumers and investors alike have enjoyed easy money policies both monetarily and fiscally for much of the past decade largely without inflation rearing its head.  However, the substantial accommodative measures employed to overcome the pandemic created abundant demand that overwhelmed depleted inventories and disrupted supply chains.  Further compounding the global supply shock has been the war in Ukraine, as well as continued lockdowns in China.

As prices escalated last year and into 2022, it became clear that the Federal Reserve was behind the inflation curve causing markets to falter.  Fed Chairman Powell finally began raising interest rates in March and continued at a moderate pace which initially calmed investors.  However, as inflation continued to rise above expectations, the Fed was forced to step up its pace.  Most recently, in addition to their 0.75% hike in September, they raised their target for future rates to approximately 4.5% which was higher than expected, pushing equities back to lows.  The fear has now shifted from feeling they were too far behind the curve to get inflation under control to the risk of oversteering and causing a bigger recession than intended or necessary.

Importantly, the objective of slowing economic growth is already underway.  We expect to see further evidence as the accumulated efforts of monetary policy both through rate hikes and quantitative tightening work their way through the economy.  Higher prices themselves began the work of slowing demand but as you would expect, rising interest rates further this cause by reducing borrowing from both individuals and corporations.  With mortgage rates near 7%, levels not seen since 2007, the already moderating housing market has slowed even further as seen in the charts below of existing and pending home sales. 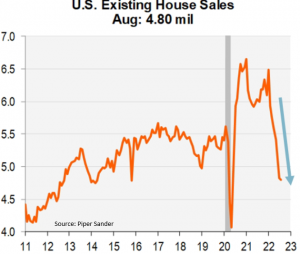 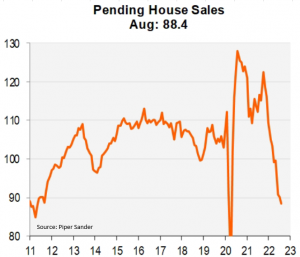 The inventory pendulum has swung in the other direction as well with many retail goods in an oversupply condition following improved production levels and sated consumers.  This should prove to keep downward pressure on goods prices moving forward.  Many commodity prices such as oil, gasoline, cotton, and aluminum have also fallen significantly off highs though remain above pre-Pandemic levels.  Others, such as lumber, a leading indicator of construction and housing, have completely returned to 2019 levels as seen in the chart below.

While supply chains have improved as product and transportation bottlenecks have eased, uncertainty within the labor and energy markets remains elevated.  Wage gains have plateaued at an annual growth rate of over 5% but remain well above the 2-3% rate seen for much of the past 15 years.  The tightness in the labor market has yet to show signs of easing with approximately two job openings for every unemployed person.  The Fed’s goal of a soft landing is largely predicated on bringing down job openings without causing widespread gains in unemployment.  This might be possible considering employers will likely be reluctant to let go of employees they worked so hard to find and train during the past two years.

The concerns regarding energy are even more difficult to predict given the global nature of the supply disruptions.  While gas prices have come down considerably in the US, elevated energy costs globally remain a more significant challenge for international consumers given the continued war in Ukraine and winter on the horizon.  Food prices are also impacted as Ukraine is a significant producer and exporter of wheat.  This energy crisis will remain a geopolitical issue that is unlikely to be resolved by slowing demand alone.

Interest rate changes generally take several quarters to impact the economy.  As a result, initial rate increases are just now being felt and significantly more tightening is in the pipeline.  Striking a more hawkish tone is appropriate to set expectations but we suspect the Fed will ultimately be data dependent and slow or pause its pace if inflation does in fact recede in the coming quarters.  However, until we have more clarity on the ultimate outcome all eyes will be on Chairman Powell and the Federal Reserve.

With the S&P 500 retreating to June lows, valuations have contracted and investor sentiment, a contrarian indicator, now sits near its trough which is a stronger foundation from which to build.  As we have seen, rallies can occur as the market works to find a bottom.  Additionally, as economic conditions tighten, the gap between those companies with growth prospects and management teams that can achieve attractive returns on invested capital and those that cannot widen.  As always, our philosophy is to focus on high-quality companies in attractive growth sectors.  These attributes tend to be rewarded by investors in slow-growth environments.

As always, thank you for reading, and please do not hesitate to reach out to us if we can assist you with achieving your investment goals in any way.